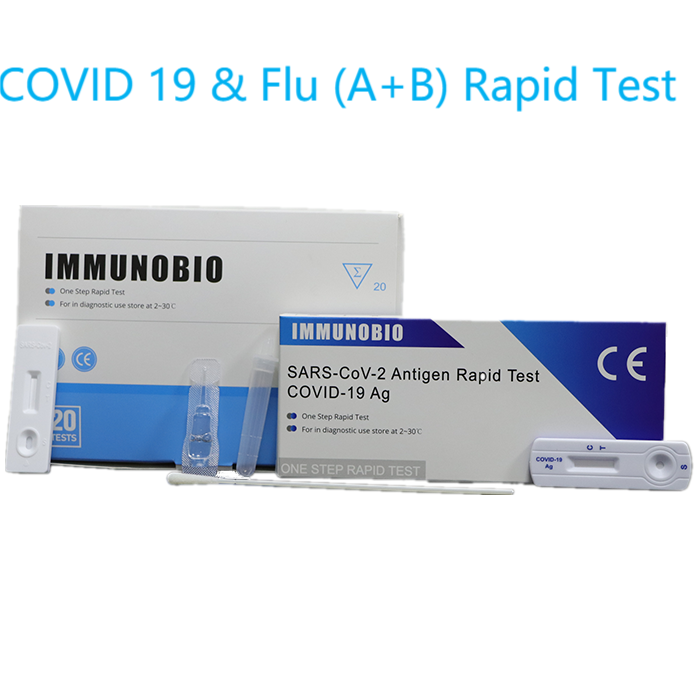 The Sars-CoV-2 & Influenza A+B Combo Rapid Test is a rapid chromatographic immunoassay for the qualitative detection of Sars-CoV-2 and Influenza A/B antigens in human nasopharyngeal swab, or oropharyngeal swab specimen in individuals who are suspected of respiratory viral infection consistent with COVID-19 and/or flu.

The Sars-CoV-2 virus belong to the β genus coronaviruses and the cause of COVID-19 which is an acute respiratory infectious disease. People are generally susceptible. Currently, the patients infected by the Sars-CoV-2 virus are the main source of infection; asymptomatic infected people can also be an infectious source. Based on the current epidemiological investigation, the incubation period is mostly 3 to 7 days, and could be up to 14 days in some individuals. The main manifestations include fever, fatigue and dry cough. Nasal congestion, runny nose, sore throat, myalgia and diarrhea are found in a few cases.

The Sars-CoV-2 & Influenza A+B Combo Rapid Test is designed as a simple tool in detection of Sars-CoV-2. influenza A and influenza B for regular clinical diagnosis.

The Sars-CoV-2 & Influenza A+B Combo Rapid Test is consist with two test strips which could be observed in the two windows of the rapid test cassette. Both of the two strips are based on sandwich method immunochromatographic assay. The nucleocapsid protein of Sars-CoV-2, generic Influenza A antigen, and Influenza B antigen are targeted individually.

To serve as a procedural control, a colored line will always appear at the control line regions(C) indicating that proper volume of specimen has been added and membrane wicking has occurred.

1) Foil pouches, each contains one test cassette, and one desiccant bag

Materials Required But Not Provided

Allow the rapid test, specimen, buffer, and/or controls to equilibrate to room temperature (15-30°C) prior to testing.

Sars-CoV-2 Positive: Both of the C line and T line appear in the left window of the rapid test cassette.

Influenza A Positive: Both C line and A line appear in the right window of the rapid test cassette.

Influenza B Positive: Both C line and B line appear in the right window of the rapid test cassette.

Invalid: Control line fails to appear. Insufficient specimen volume or incorrect procedural techniques are the most likely reasons for control line failure. Review the procedure and repeat the test with a new test. If the problem persists, discontinue using the test kit immediately and contact your local distributor.